Kent Cricket – Now and Then

I was reading something about the Olympics, and whether or not they would ever allow cricket to be one of the participating sports (my money’s on ‘not’), when my mind switched to Tokyo where they are trying to hold the Games next year, and to the last time they were held in Tokyo, in 1964. That in turn reminded me of a cricket match in May that year, between Saltwood Cricket Club, near Hythe, and Martin Walters XI, a team drawn from the employees of a large coach building company that created the Dormobile, based in Folkestone. Before I continue with this story, I should say that Martin Walters XI was a well-established works cricket team, who played several matches each season, and had played against Saltwood for many years. So they were not a scratch side of players without a clue as to which end of the bat to hold. 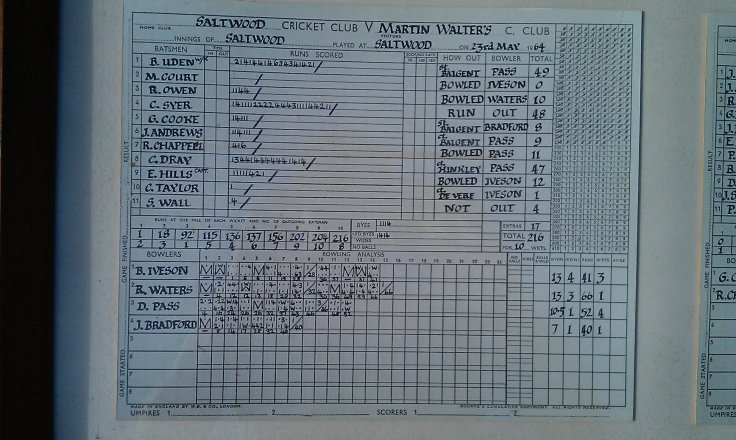 The card of the Saltwood innings

On Saturday 23 May 1964, a sunny late spring day, the two teams made their way from a pub lunch at the Castle in Saltwood, and assembled at the ground on Tanner’s Hill. Saltwood won the toss and batted. 21-year-old opening bat Barry Uden made 49 before being stumped – ah, the impetuosity of youth! Barry played for Saltwood for many years and scored thousands of runs, but although he top scored for the village that day, his opening partner Mick Court was proudly able to tell everybody (and he did, for many years) that he scored precisely as many runs as the entire opposition.

Three Saltwood batsmen scored 40s, but none made it to 50. Chris Syer, then a resident of Singapore on leave and making his debut for Saltwood, scored 48 before being run out, and Charles “Chook” Dray, one of the more senior members of the side and usually a dour batsman, made 47 at number eight, including ten fours, before being last out with Saltwood’s total at 216, off 43.5 overs. Tea was then taken. The pitch was behaving itself and the Martin Walters XI were not apparently daunted by the task ahead.

The bowling was opened by Geoff Cooke, then a 21-year-old student teacher and later captain of Saltwood and a long serving science teacher at the Harvey Grammar School in Folkestone. He bowled a maiden to de Vere, confusingly put at number two on the scorecard despite facing the first ball of the innings. No sign of the excitement to come after those first six balls. The fireworks began when 19-year-old Bob Chappell opened at the other end. Chappell had played little cricket at school, but quickly developed into a rapid if not always totally accurate bowler for his village side. He struck with his second ball, clean bowling the Walters XI’s opening bat, and again with the last ball of the over, when the number three bat, Waters, hit a long hop straight to Chris Syer at square leg. 0 for 2. At the other end, Geoff Cooke bowled another maiden over to Mr. de Vere. In Chappell’s second over, the mayhem continued – two more wickets as numbers four and five failed to survive. Their bearded skipper, John Bradford, was caught behind first ball by wicket-keeper Barry Uden, who says today that he has no recollection of the catch, “but I was probably diving at full stretch”. It’s amazing how one’s cricket improves years after giving up the game.

At 0 for 4, the Martin Walters XI were probably beginning to think they might not reach their target, but the next over was once again another maiden from Cooke to de Vere. Bob Chappell’s next over put the seal on things. Geoff Cooke remembers that he was fielding in the slips and the ball was snicked past him, and as he turned to chase, “they thought about a run. But they hesitated and so in the end there was no run.” There was, however, another catch for Chris Syer as another long hop from Chappell was hit gently straight at him at square leg. 0 for 6 at the end of the over. At this point, poor Mr. de Vere at the other end, no doubt demoralised by his fellow batsmen’s incompetences, attempted a positive stroke off the first ball of the new over by the thus far wicketless Cooke. His first mistake: another snick, another snaffle by Uden behind the stumps, no doubt another diving catch at full stretch. Is there any other way a village keeper will ever tell you he has taken a catch? And now that Bob Chappell was no longer on for all ten, Geoff was free to take another wicket with the last ball of his over. 0 for 8. In Chappell’s next over, he got the umpire to agree to his lbw appeal against their number 8, and in the next over, to show there were no hard feelings about the all-ten, Chappell took a catch off Cooke’s bowling to end the innings. It had lasted no more than 25 minutes. Saltwood won by 216 runs, Chappell 7 for 0, Cooke 3 for 0. 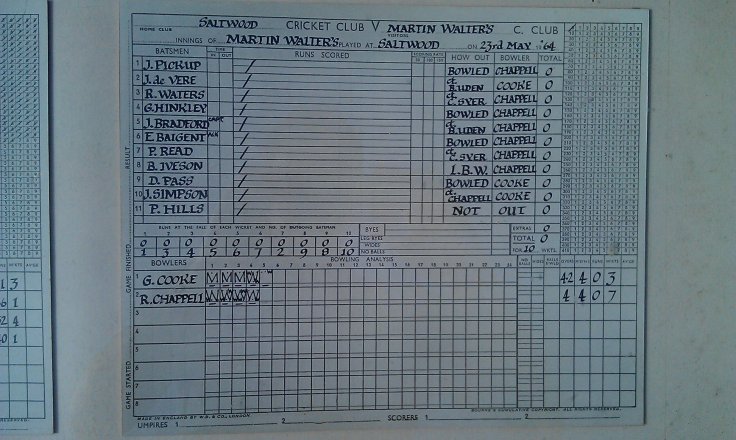 The card of the Martin Walters XI innings

The aftermath of the match showed that it is an ill wind that blows no good. Martin Walters’ captain, John Bradford said “None of us quite knew what happened. We’ve beaten Saltwood twice before and we beat them in the beer match afterwards.” Both Barry and Geoff, the Saltwood team’s only two survivors, say today that it was just a fluke. Chris Syer, on debut, thought this was the way all Saltwood’s games went.

Saltwood’s most fervent supporter at the time, John Burnett, scurried up to the village phone box on the green and telephoned the national press, and over the next couple of days the story was told on sports pages up and down the country. Years later, in 1980, the great boxing commentator Harry Carpenter came down to the local pub with a BBC team to talk with several of the Saltwood side about the game, and it was broadcast later in the year. Martin Walters said it did their business no harm – they got more publicity from that one match than from all their normal paid-for advertising.

Saltwood had to play neighbouring village Hastingleigh the next day, and having celebrated rather too well the night before, only just managed a narrow victory. However, history shows that the Martin Walters match was not entirely a fluke. A year later, against Mersham, Saltwood dismissed their opponents for just 4, a snick through the slips, and the bowling analyses were Cooke 5 for 0, Chappell 5 for 4.

I played for Saltwood for around 35 years, and can confirm that we rarely achieved anything out of the ordinary, but that game in May 1964 will always be part of cricket history.

This is a text widget, which allows you to add text or HTML to your sidebar. You can use them to display text, links, images, HTML, or a combination of these. Edit them in the Widget section of the Customizer.